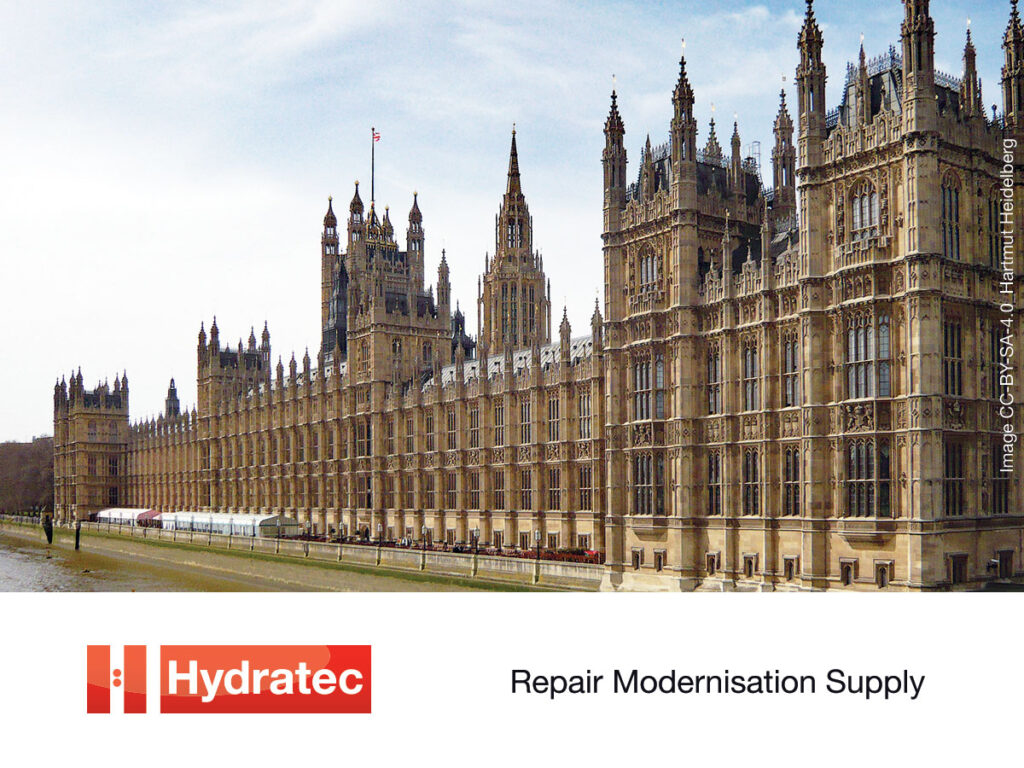 Working on behalf of our client, Hydratec have installed three Bucher REGEN systems within the Palace of Westminster.

One of the lifts was using a Bucher BERIPAC™ system, that was to be converted to a conventional 2:1. For those of you not familiar with the BERIPAC, this system used a pulling cylinder rather than a conventional cylinder. The car sling, roping system, pulley and cylinder were converted and a new motor room was formed to house the drive unit and controller. The accumulators were removed and the REGEN unit installed.

Below are some diagrams explaining the conversion process. If you would like more information on converting the BERIPAC system, please get in touch. 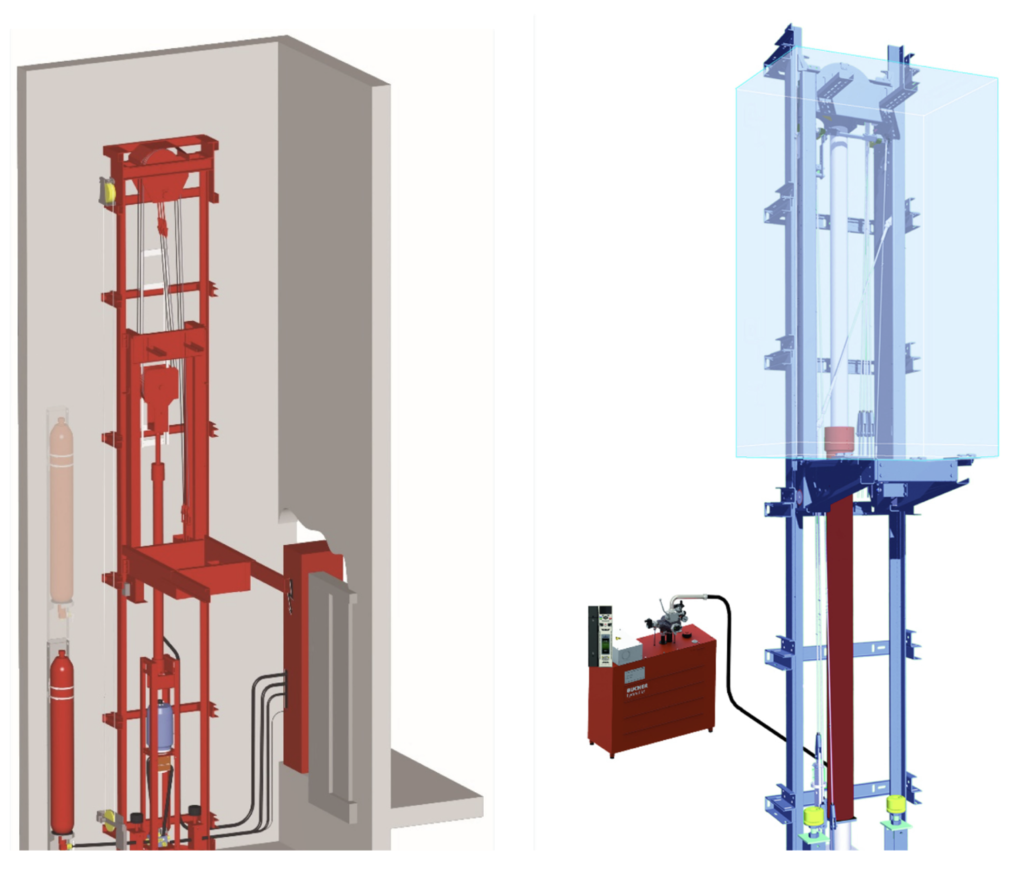 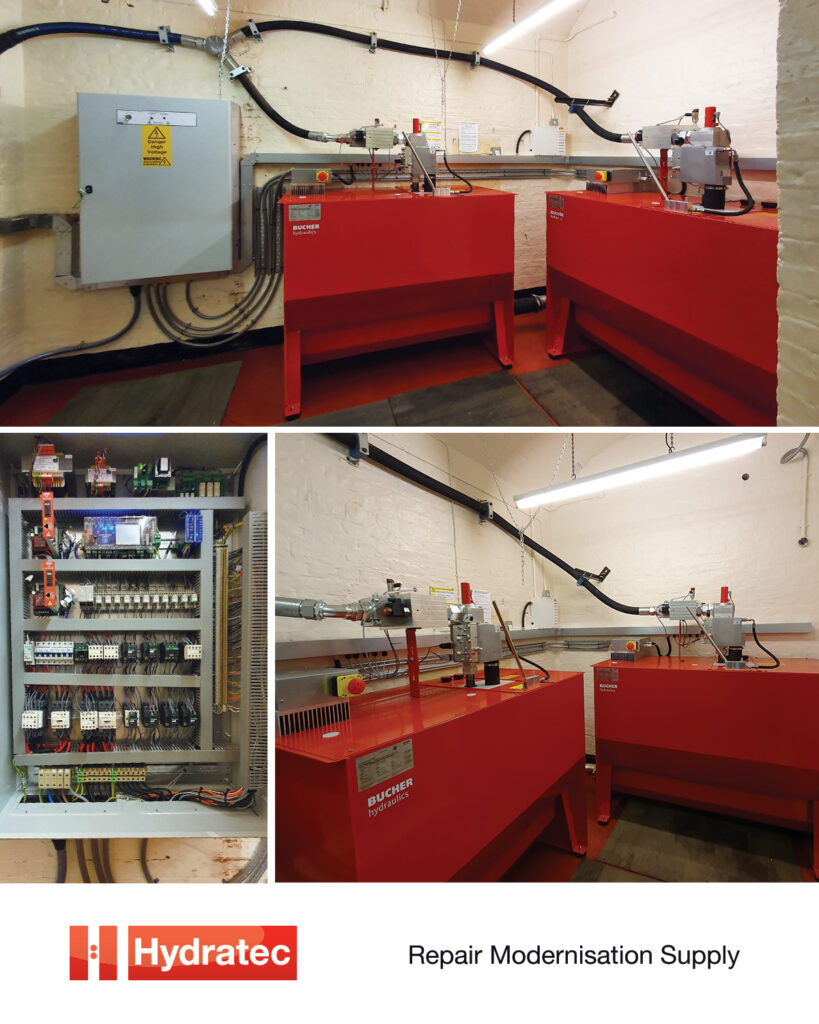 Hydratec were asked to provide a bespoke solution for a critical lift located in a well-known London landmark building. The lift had been suffering from ongoing reliability issues. It had been originally supplied with two tank units, the tank units were linked to allow one tank to take over in the event of failure of the other. The changeover system was very complicated and our brief was to replace the tank units and make the changeover very simple.

We achieved this by using a twin Bucher Hydraulics LRV power unit with twin A3 valves and a bespoke Lester Control Systems Ltd control system. The whole system can now be swapped from tank to tank with the use of just one key switch, irrespective of lift position. Our team carried out the modernisation on behalf of one of our customers and the client is very pleased with the result.

If you need any bespoke hydraulic solutions we are here to help; our next ‘off the wall’ project is a hydraulically-operated, counterbalanced moving wall in a listed building in London. 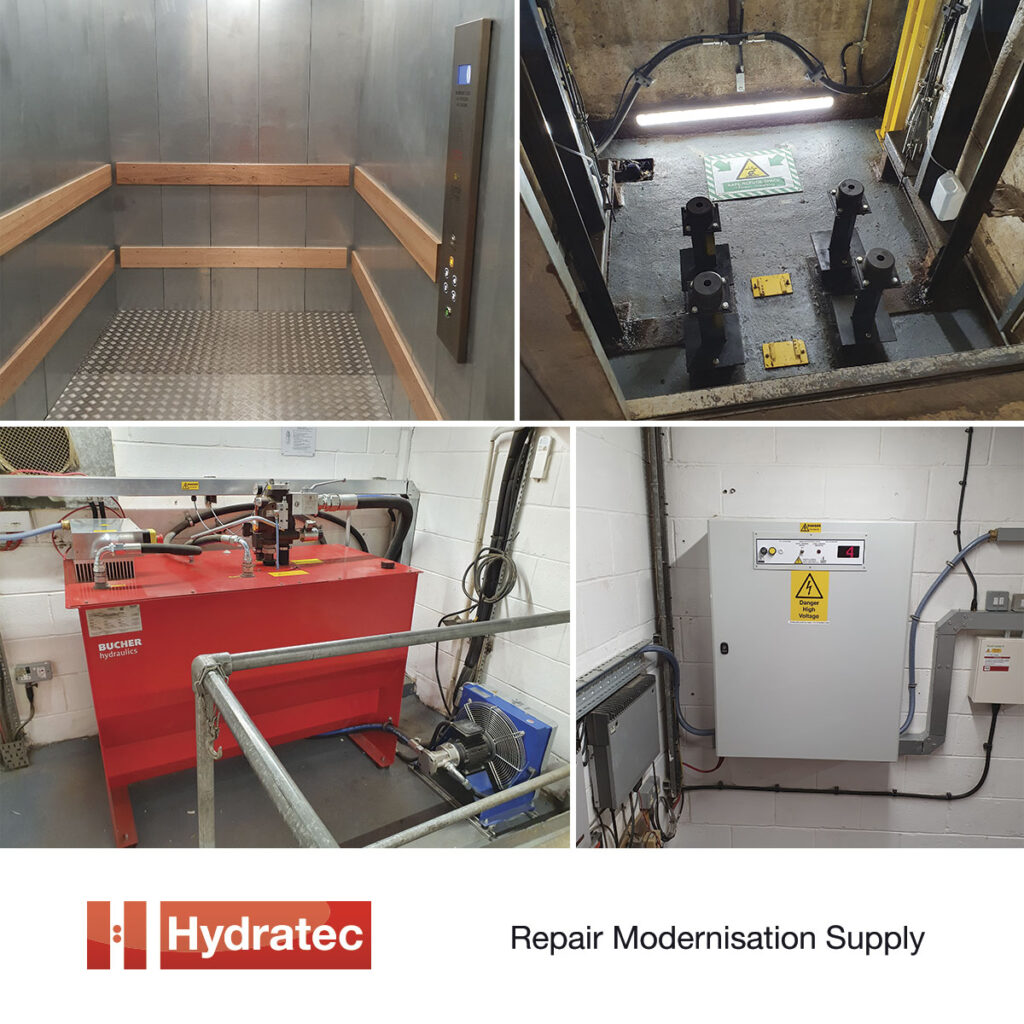 Hydratec engineers completed the full modernisation programme of a 2-tonne 5-storey lift, at one of the largest UK sewage treatment plants

A tricky job to undertake at the best of times it was made particularly difficult due to the hot weather over last summer, We were very pleased to hear how happy the client was with the final results – so much so, that following a safety audit they considered us the best contractor they had ever had on-site which is high praise indeed considering the stringent safety standards in force. 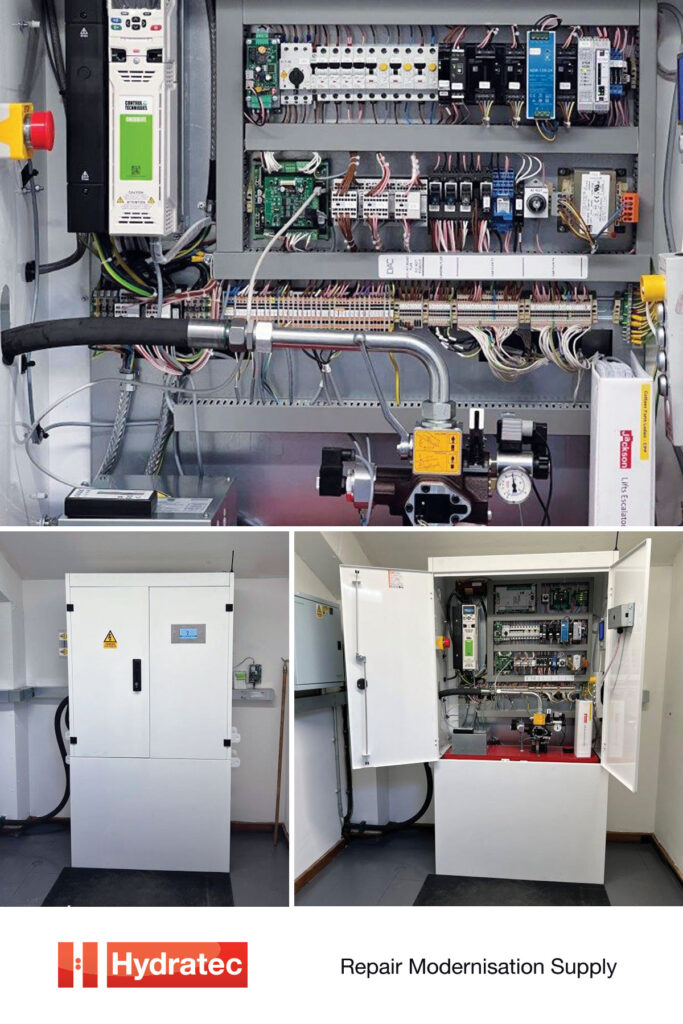 We are pleased to announce that, following a request from one of our customers, the first smart® system with a Digital Advanced Control controller has been installed.
Our customer is very pleased with the ease of installation of the full plug and play solution. It was a very quick and easy installation, and we have a very happy client. 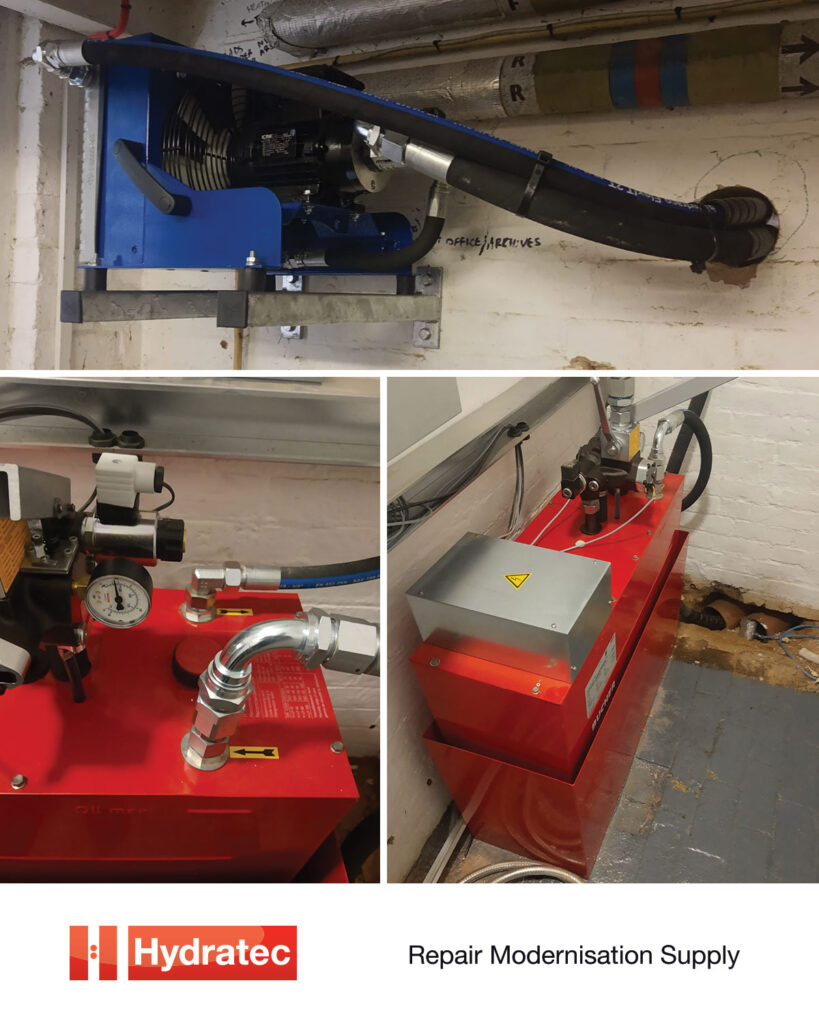 Working on behalf of one of our multi-national customers, we have installed another Bucher Hydraulics Saturn Beta iValve power unit. The pictures show the install part way through the modernisation.

An oil cooler was requested to comply with the specification. A difficult hose run under the floor (in excess of 23 metres), and in 4 wire hose! Not the easiest to get through but we did it. 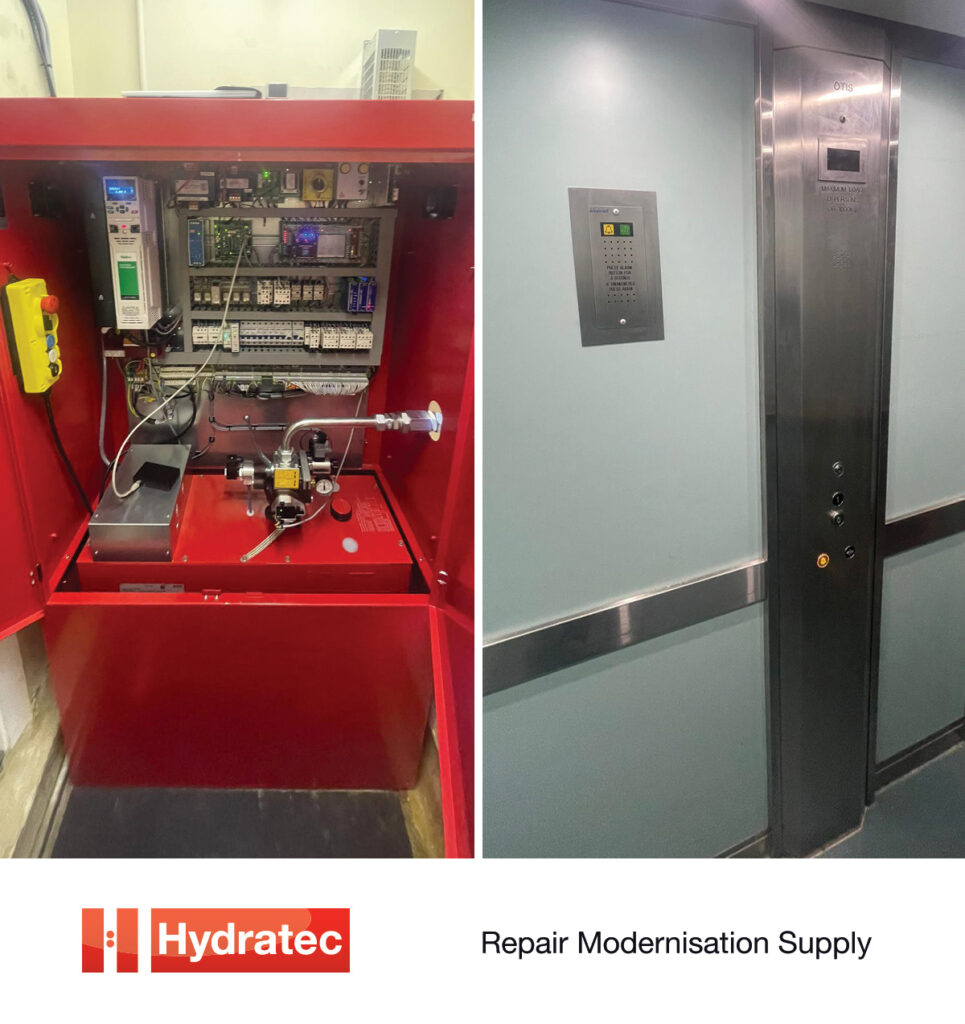 These packages all include Lester Controls Almega II controllers and Bucher iValve power units. The remaining units will be completed during the course of the year. 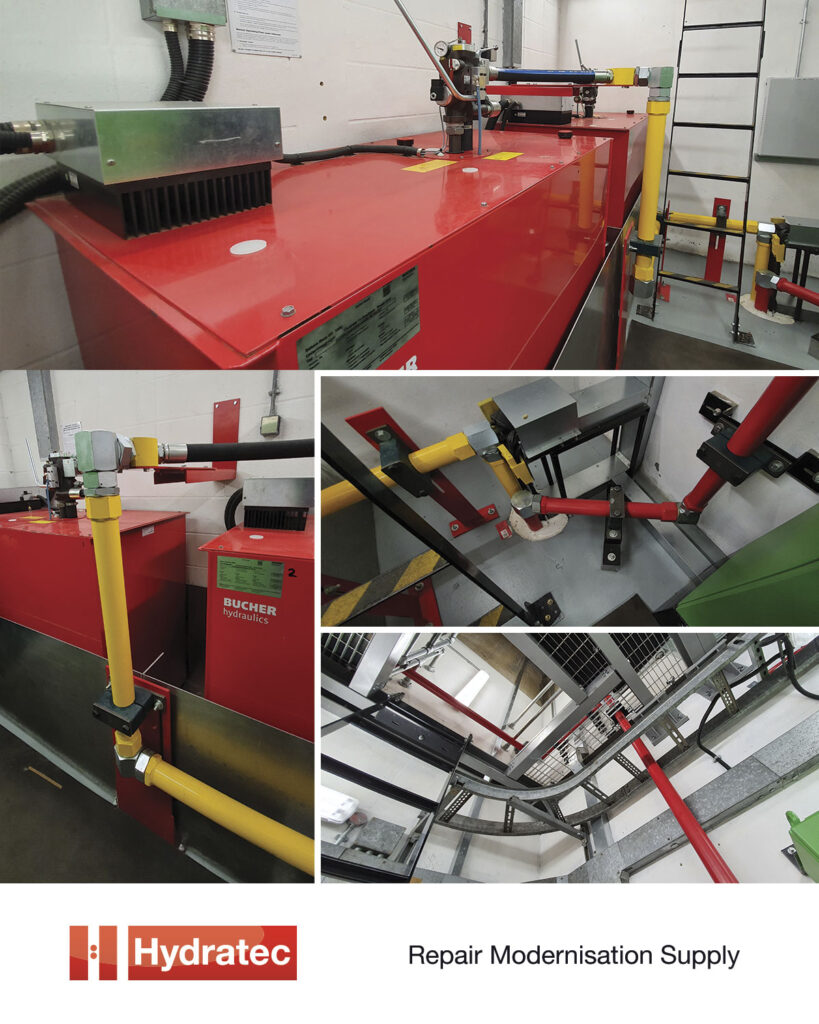 There were many challenges to overcome including the weight of the equipment being removed and installed (one jack weighed over 7000kg), the problems with installing the power units where space was at a premium and making sure we had safe working spaces. It meant a complete redesign of the motor room layout.

The original motor room had three power units installed with minimal clearances between them. The floor dimensions were not large enough to fit the new power units and larger controllers. Fortunately, it was high enough to allow for a mezzanine floor to be built. The incoming mains intake cupboard also had to be repositioned, to give more clearances.

The requirement for a bund tank meant Hydratec had to design, build and install a custom-sized aluminium drip tray and bracketry. The pipework was also custom-made due to the number of bends needed. In order to avoid pressure losses, Hydratec had specially fabricated, large-diameter steel piping made, with special fittings. All the pipe work was measured, cut and trial fitted on-site before being welded and powder coated. To differentiate the two sets of pipework, the client specified the striking red and yellow colour scheme. 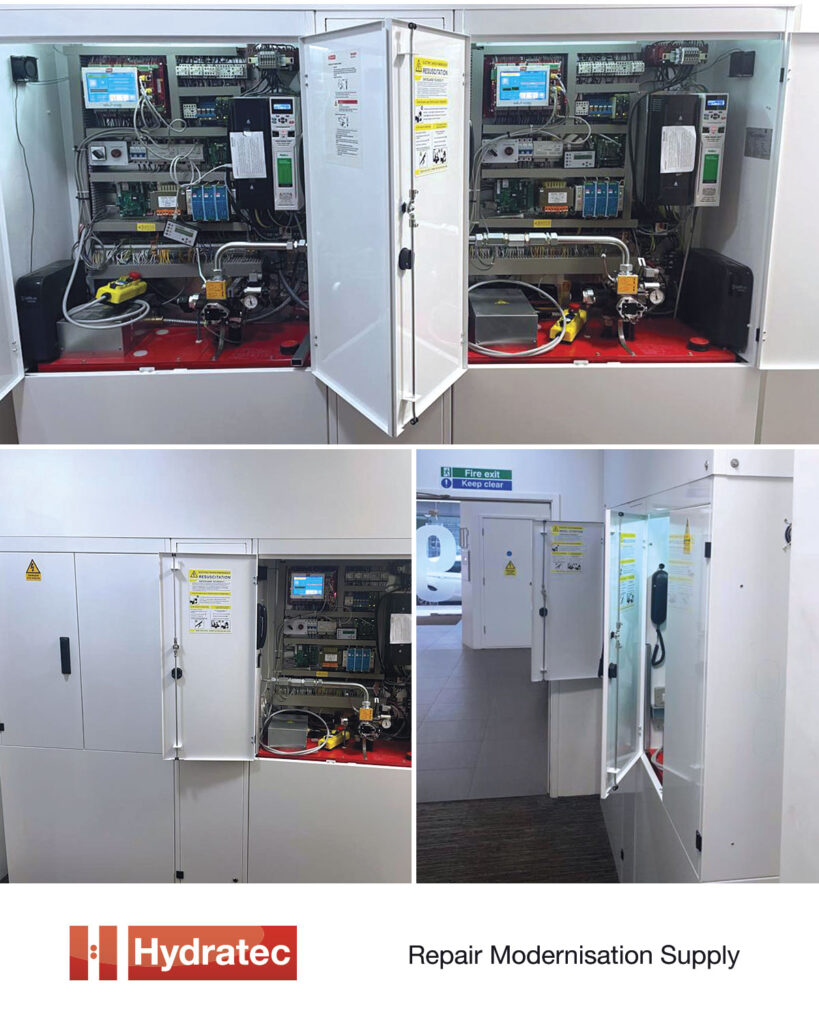 Previously refurbished in 2020, the building’s two existing 5-stop machine-room-less hydraulic lifts were having reliability issues. As a result, Hydratec was approached for the supply and installation of two Hydratec smart™ hydraulic lift modernisation packages. Included in the smart™ packages were Thames Valley Controls controllers and Bucher iValve power units.

Due to the client’s request for the units to be easily accessible and to blend in with the building’s aesthetics, the smart™ cabinets were tailor-made to match the building’s colour scheme and were built into a recess. Now fully complete, the installation project also included removing the power units from the pit to the landing and relocating the incoming mains power supply. 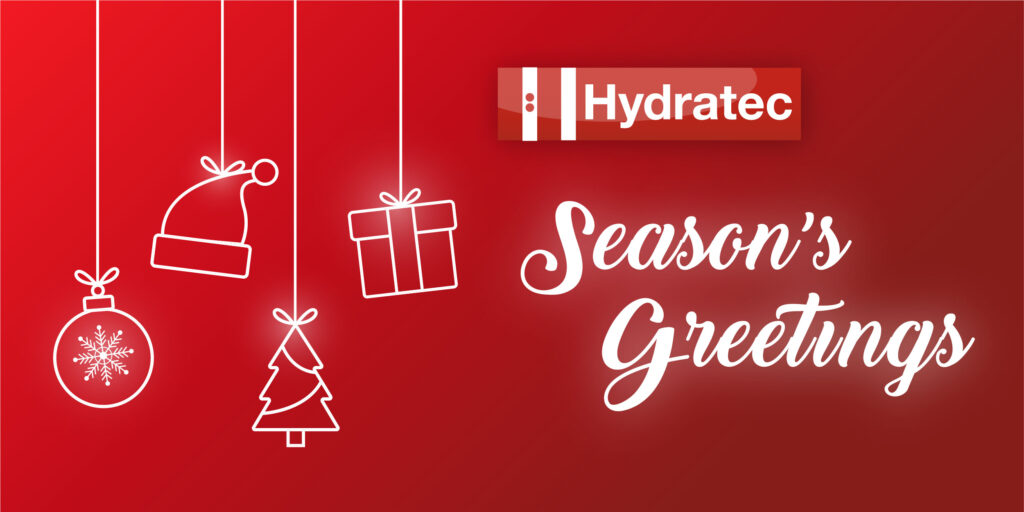 Hydratec would like to wish everyone a Merry Christmas and a Happy New Year!

We would like to thank all of our customers for the continued partnership throughout 2021, and we look forward to working with you again in the coming year.

Here are our opening hours during the Christmas holiday period: 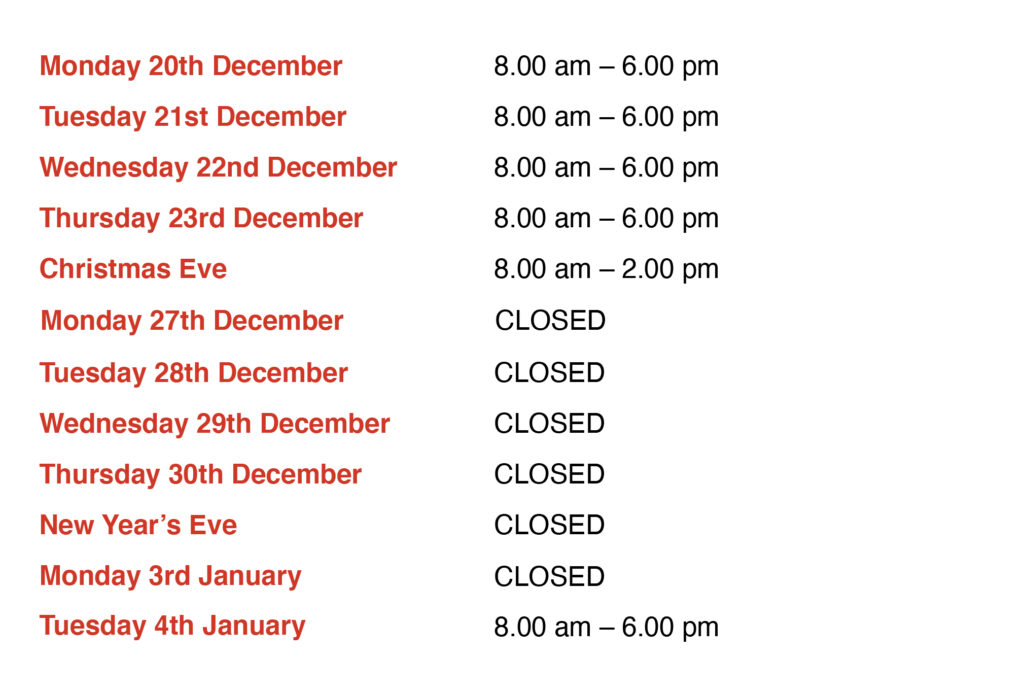 For further information on our services, please don’t hesitate to call either of our offices, located in Yateley, Hampshire and Heywood, near Manchester. 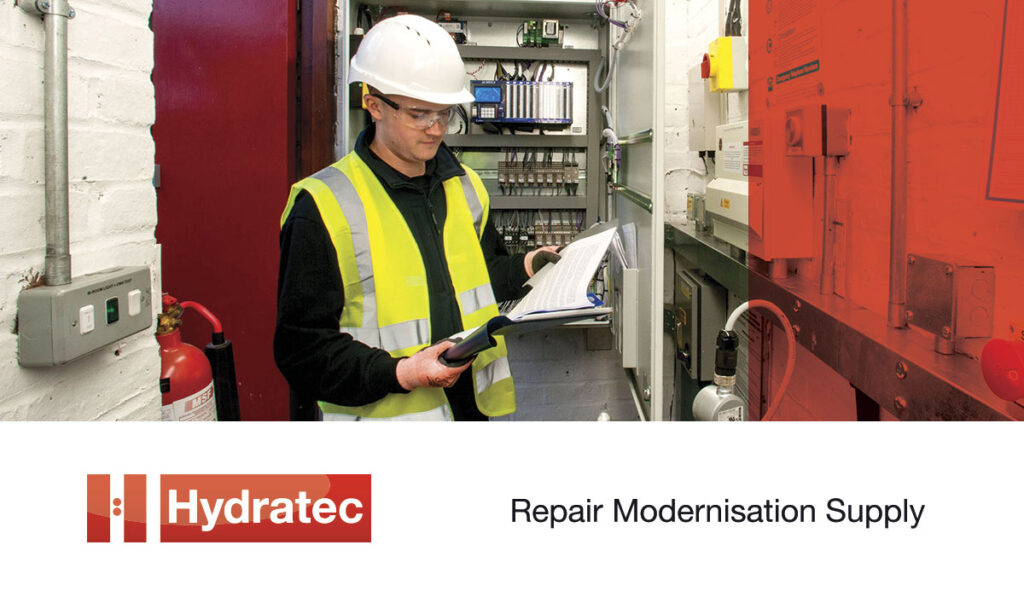 With the improvements in hydraulic drive technology, it is always worthwhile exploring the options you have during partial modernisation of your hydraulic lift.

When considering a controller upgrade it is most likely due to age or unreliability. If the controller is 30 years old, for example, so is the rest of the equipment. The power unit is often overlooked or just given an overhaul. What is sometimes not considered is the benefits of combining that new controller with a new power unit.

A new power unit can give you improved ride comfort through closed-loop control, more efficient drive, reduced energy consumption, and improved starts per hour. It will also replace the 30 year old pump, motor and valve with the resulting guarantees on the new equipment.